Affirmative Defenses to Breach of Contract

“Affirmative defenses to breach of contract! The state of California defines contracts as either express or implied. In contrast to implied contracts, express contracts can be oral rather than written. If no other California statute requires a written contract, for example, in the case of home sales. A contract is, in legal terms, a “promise whose violation the law recognizes. A duty or performance that the law recognizes. The shorthand for this might be, “A contract is a legally binding promise.” 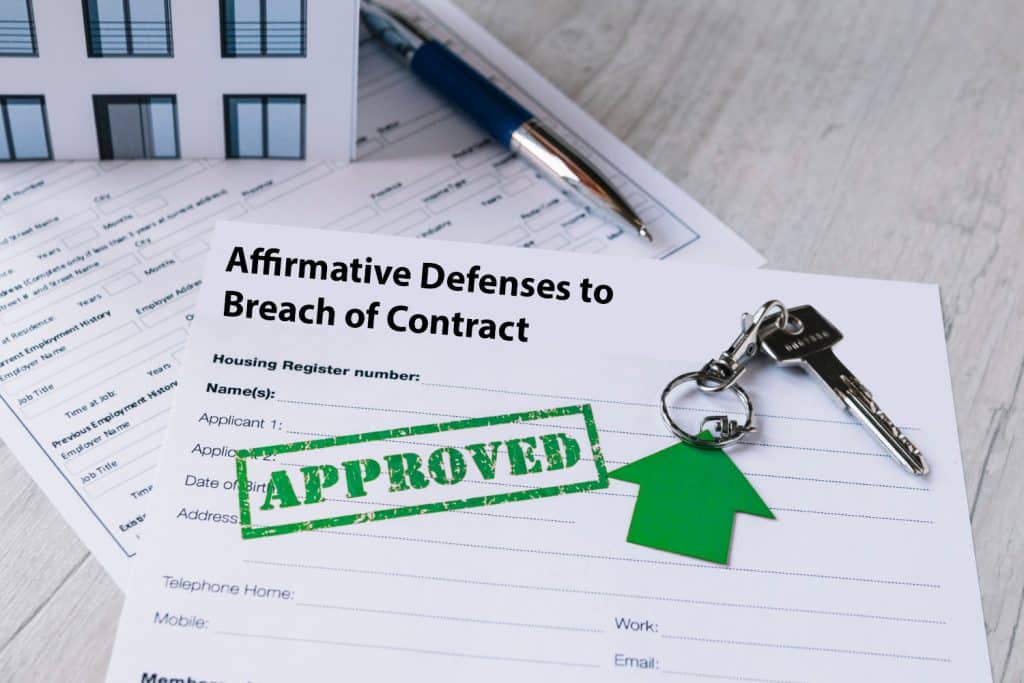 Defenses to Breach of Contract

A party must generally live up to its promise if it breaches a contract. But it must generally subvert the whole purpose of the agreement. For it to be subject to civil litigation. Other breaches are major and threaten the very continuation of the contract. Whereas others are minor and easily repaired. Breach of contract lawsuits often results from major breaches. You need an attorney experienced in civil litigation of contract law when there is a breach of contract. Whether you are the breached or breacher.

In a breach of a contract dispute, the party raising the defense is responsible for proving the defense in court. A positive defense does not contest the primary claims or facts. But asserts mitigating facts or circumstances that cut the breach claim. It is not fair for the other party to win the lawsuit, even if I breached the contract.

Consider the case of Dodd, a teenage singer who fails to attend a concert and is accused of violating the contract. Since Dodd is a minor, he can assert that he could not agree in the first place, regardless of whether he breached it.

You need to find a lawyer with experience in this area to help you put forward an affirmative defense against a claim for breach of contract.

What Are Some Examples of Contract Breach Cases?

Breach of contract cases is few and far between. Among the categories are:

Minor breaches of contract are the simplest type. Someone can get into trouble if they don’t follow a small clause in the contract. In the case of a repair shop, for example, you might bring something there. The repair shop promises to deliver the finished product by a certain date. A minor breach of contract may occur if they miss the deadline or return it late.

The severity of a material breach is higher. It happens when someone does not follow the agreement’s intended purpose. For instance, someone may have signed a contract promising you 1000 of a certain product. Upon receiving it, you find that there are only a few dozen products, and they are not what you ordered. A material breach of contract would result from this. Other categories of breach of contract cases include actual breaches and anticipatory breaches. They differ in the following ways:

In actual Affirmative defenses to breach of contract, one party fails to fulfill or refuses to fulfill the terms of the contract. It is already a breach, in essence.

An anticipatory breach occurs when one party informs the other in advance. That they will not be able to meet the contract’s terms. However, the contract hasn’t technically fallen apart yet. The other party knows they won’t be able to fulfill the terms. The contract terms will not be met by one party or have already not been completed by one party. How does this affect the law, and what happens next?

What Are the Legal Implications of This Allegation?

In this case, only a breach of contract lawsuit could resolve the situation. 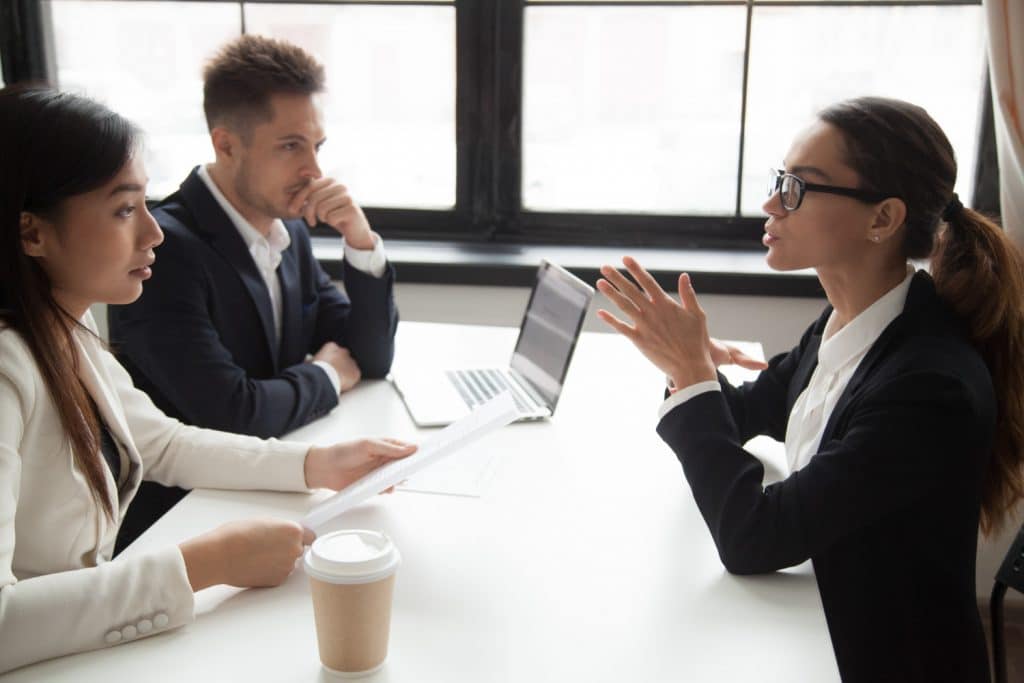 It is necessary to discuss several issues. Among them are following:

You must defend yourself if you have filed a lawsuit for breach of contract. This is why you should hire a lawyer with experience in this field. An affirmative defense might be appropriate for you.

Meeting of the Minds / Mistake

Affirmative defenses to breach of contract. Contracts need a “meeting of the minds.” Both parties must agree upon all essential contract terms to be enforceable. Revocation, or the non-enforcement of the agreement, is possible if either party misunderstands the contract’s terms.

The mutual mistake defense and the unilateral mistake defense are available to defend against mistakes. If both parties make mistakes about a contract. It is usually a question of whether the parties reached an agreement. A unilateral mistake may not be enough to void a contract. The court will not enforce an agreement if the non-mistaken party caused the error or knew the other party was making a mistake and didn’t help correct it.

Courts may allow court to correct a mistake in writing down a term or terms. This refers to “reformation.”

An act of coercion occurs when one party has to enter a contract they would not have otherwise entered into. Blackmail, threats of injury, or lawsuits may be examples of coercion that can void a warranty.

Courts will likely find an unfair contract unenforceable if the terms are unfair to one party. The parties usually agree to unfair terms when one is a company, and the other is an individual. The company likely has a stronger bargaining position.

It is also likely that a court will find the contract excessive and, thus, invalid since the individual is unlikely to be able to protect his interests. A court will determine whether the defendant had a meaningful choice when agreeing to the terms. Courts may not enforce terms that are so unfavorable that they would create an undue hardship to enforce.

This sounds like an impossible performance. Performance may become impossible or impractical after a contract has been signed. The contract becomes invalid in this instance.

It refers to the “dirty hands” doctrine when one party accuses another of the same type of breach. Because both parties are at fault (or have “unclean hands”), neither should be granted relief.

A “Force Majeure” refers to unforeseeable circumstances that allow certain types of contracts to stop.

In cases where the promisor (the party who makes the promise) fails to meet certain requirements or conditions of the contract, the promise (the party to whom the security pertains) may protect itself from a breach. As a prerequisite to filing suit, a contract may need a particular form of notice to send to a specific person.

Affirmative defenses to breach of contract

It is up to your lawyer to decide how to frame your legal defenses in a breach of contract lawsuit. Some common reasons include.

Contracts should be in writing.

The other side may argue that they can enforce an oral agreement against you. But you can say that state law requires a written contract, for example, when selling real estate.

Affirmative defenses to breach of contract might be indefinite if the essential terms were never agreed upon. There is either no agreement between the parties, or a court cannot discern the essentials, even by implication (for example, if it’s unclear for a construction project how long the contract should last). Generally, letters of intent and agreements are considered indefinite and unenforceable, though courts require the parties to act in good faith.

There is a mistake.

The Affirmative defenses to breach of contract may be voidable if you lack capacity (that is, you didn’t understand what you were doing when you entered the deal). This defense is most likely to succeed if the defendant is a minor or has a mental disability.

When you sign a contract under duress or under the influence of a trusted person (for example, your real estate agent secretly gets a kickback from the seller), it will be invalid.

The contract is unconscionable.

In the event of gross unfairness, a contract will not be enforced. There is almost always an imbalance in bargaining power (as in a contract of adhesion) where the party with more power exploits the other party by imposing unfair conditions, clauses, or waivers.

It may be difficult for the first party to deny the statement later and claim a breach when the other party relies on it to excuse performance. For example, if a bank president promises a homeowner that the bank won’t foreclose for six months to give her a chance to sell the home, the bank will have to keep its promise.

The contract is illegal.

Contracts are unenforceable if their object or bargain is illegal, such as enabling prostitution, violating tax laws, or destroying records. Some states may enforce contracts that indirectly aid illegal purposes. An agreement to provide gambling machines, for example. It may be executed, even though it is illegal in certain states. Sometimes, a court may separate an illegal part of a contract from its rest, making it enforceable.

In a breach of contract lawsuit, you can claim as many alternative defenses as you want, even if they contradict each other. Even though all of these arguments can’t be true, you might argue that the contract is invalid. You might also say that you performed under the agreement or that the other party’s actions justified your failure to perform. The defense attorney might argue that his client was 100 miles away from the murder scene. He killed the victim in self-defense. You may also admit to the breach but only defend against claims of damages by the other party.

Affirmative defenses to breach of contract. You should consult a California contract law attorney whenever a contract issue arises. Especially when a breach has occurred. The attorney, real estate group, has more than 45 years of experience in business and contract litigation.

You can exercise your full rights under the law and protect your vital interests by contacting the attorney real estate group immediately. If you have suffered a breach of one.